Dead Money
Old World Blues
Lonesome Road
“And so the lockdown has been extended. To go outside would be the death of us all.”— Nolan McNamara

The Mojave chapter[2][3] is a chapter of the Brotherhood of Steel active in the Mojave Wasteland.

While officially sent out to secure Hoover Dam,[4][5] the formation of the Mojave chapter was mainly a result of disagreements within the elder council. Elijah, a scribe-come-elder, pushed for the development of new technologies, which put him at odds with the more conservative members of the Brotherhood. As Elijah proposed developing new ethically questionable weapons somewhere around the early 2260s,[6] the elders decided to send him away to the east, to form a new chapter of the Brotherhood in the Mojave.[7]

The new chapter settled into the Hidden Valley bunkers, then rediscovered HELIOS One. Elijah, already considered unorthodox for his focus on improving technology, rather than simply preserving it had ordered for it to be converted into the Brotherhood's headquarters despite objections from nearly every paladin in the chapter.[1] The Mojave chapter operated freely amid the Vegas wastes for several years, carrying out many reclamation missions without serious opposition. The balance of power shifted in 2273 when a large contingent of NCR troops entered the region and occupied Hoover Dam. The conflict was inevitable.[8]

Elijah's obsession with HELIOS One and the need to defend against NCR forces deploying into the Mojave resulted in the Brotherhood ignoring the expansion of the Van Graff family into the Mojave, despite them distributing pre-War energy weapons. The Elder's orders were clear.[9]

War with the New California Republic

In 2274, the NCR had officially set up a base at McCarran International Airport. From there, the NCR soon set its sights on the HELIOS One solar plant. Elijah, still believing that the plant contained an unprecedented military advantage, refused to leave the plant, and forced the Paladins to continue defending it. Two years of guerilla fighting against the NCR followed, culminating in Operation Sunburst in 2276.[8]

The NCR launched Operation Sunburst to capture HELIOS One. Outnumbered by NCR soldiers, a pitched battle took place. Despite the Brotherhood being in control of far superior equipment, such as energy weapons and power armor, the Brotherhood lacked reinforcements and were gradually worn down by NCR's attacks. By the time the retreat signal was given by Paladin McNamara, more than half the chapter lay dead in the dust. The chapter's leader, Elder Elijah, disappeared without a trace. Brotherhood survivors retreated to Hidden Valley, while the NCR regrouped at the newly occupied HELIOS.[8][10]

With no leader, Head Paladin McNamara took the title of elder for the chapter. Out of fear of Hidden Valley being discovered, Elder McNamara restricted activity outside heavily, locking down the bunker and limiting outside assignments to occasional reconnaissance missions and high-value raids, as well as necessary supply runs by dedicated couriers. All operations take place at night, and the engagement of NCR forces is strictly forbidden. Though the Brotherhood's ascetic lifestyle has prepared its members for a sequestered existence better than most, the passivity of their current situation has proved highly stressful.[8]

The chapter operates a policy of strict isolationism: no outsiders are allowed anywhere near the bunker, and anyone found near it is killed. The only people cleared for surface access are nightly Hidden Valley patrols, scouts, and procurement specialists securing food, water, and other necessities. All members of the chapter are direct descendants of the original Brotherhood, with no outside recruitment.[11] Combined with the fact that the chapter has lost half its number at HELIOS One and failed to recover its strength while the Republic's hold on the Mojave has only increased (with the number of troops alone increasing five times),[12] and that extended isolation is taking its toll on the chapter, its situation is precarious. While virtual reality simulators and firing range exercises keep the Knights and Paladins (many of whom have only virtual combat experience) sharp, the chapter is incommunicado to the rest of the Brotherhood.[13]

Without reinforcements or some kind of long term solution that doesn't involve hiding underground, it is sure to perish. This questionable policy has led Head Paladin Edgar Hardin to take steps to ousting the current Elder and implement his policy. While he has sympathizers who support his goal of replacing Nolan McNamara, he has not made any overt moves against the Elder out of respect. The Courier is the only known outsider to have visited the bunker, and thus can determine the fate of the ill-fated chapter. While Mr. House and Caesar want the Brotherhood dead, the NCR is a bit more flexible, and the Courier can instead negotiate a truce with the Brotherhood, which will ensure the Brotherhood's survival in the Mojave for some time. The Courier can only make a truce between the NCR and the Brotherhood if McNamara remains the elder.[14][15]

The Brotherhood of Steel is a militant organization devoted to the preservation of pre-War technology and human knowledge. Their professed mission is to preserve pre-War technology and human knowledge for the benefit of future generations. In practice, its definition of technology is selective to its own needs, ignoring basic but potentially useful technologies (genetic modification of crops and civil engineering, for example) in favor of combat technology such as energy weapons and power armor; and even now, nearly two centuries after the Great War, the Brotherhood zealously restrict the use and knowledge of such technologies to its own membership.[8]

Since the Brotherhood War, the Mojave brotherhood has kept its contact with the outside world to a minimum, due to heavy casualties. Other than a few scout patrols and supply scavengers, such as Veronica Santangelo, that come in and go back out at night, no members are allowed to leave the secure bunker and people outside of the Brotherhood entering or leaving the Hidden Valley base is unheard of.

Because of the Hidden Valley lockdown, only a select few are able to leave the bunker. Because the Courier is not an official member of the Brotherhood, they become a natural choice to find lost Brotherhood patrols without jeopardizing other members of the organization. Depending on the Elder leading the Brotherhood, the Courier can aid the Brotherhood further by tapping into the radar systems of Black Mountain or eliminating the Van Graffs, who hold a large cache of energy weapons.

The Mojave Wasteland chapter of the Brotherhood of Steel utilizes a mixture of both the T-45d and T-51b model of power armor, with the T-51b used predominantly. Their weapons are energy-based, with tri-beam laser rifles being almost standard issue to the guards and patrols in and around the Hidden Valley bunker, while Gauss rifles are also widely used. Scribes use the Laser RCW (including Elder McNamara) or zap glove. Patrols sometimes include heavier weapons such as the Gatling laser. Their scouts continue to find weapons in the Mojave, resulting in many unused weapons being stored in the Brotherhood armory. It seems that the Brotherhood scribes are researching night vision optics and unique project initiatives such as automatic doors.

Narrated by Nolan McNamara, even if he is no longer elder.

The Mojave chapter of the Brotherhood of Steel appears only in Fallout: New Vegas, and is mentioned in the add-ons Dead Money and Old World Blues.

On Bethesda Softworks Forums, Joshua Sawyer stated that "Many years have passed since the events of Fallout 1 and in the time between F2 and F:NV, the western Brotherhood has suffered very heavy losses. Because they are, by nature, insular, replacing their fallen veterans is difficult. Most of the Mojave chapter's paladins are relatively inexperienced. There isn't an army of Rhombuses down there." He also explained that "the Veteran Rangers in the Mojave Wasteland are also the best of a victorious army that are moved in late in the game. The Mojave Paladins are by no means the concentrated elite of the western BoS."

Most members of the Brotherhood of Steel become weaker once Old World Blues is installed, reducing their Strength and Endurance stats by 3 and 2 points respectively, and removing Explosives as a tagged skill. This affects both unnamed members, particularly those found patrolling the area around Hidden Valley, as well as some named members including Linda Schuler, Senior Knight Lorenzo, and even Nolan McNamara and Edgar Hardin. 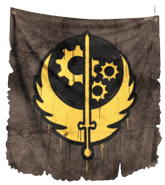