Fallout 4
“In our eyes, defeat is unacceptable because we're fighting for the future of mankind. Our rallying cry is more powerful than any weapon you could ever carry. Remember that.”— Paladin Danse

The Brotherhood of Steel is a faction in the Commonwealth led by Elder Arthur Maxson.[1]

Arthur Maxson was appointed elder at age 16, the youngest in Brotherhood history, after displaying skill as a warrior and diplomat by defeating the super mutant leader Shepherd and brokering peace with the Brotherhood Outcasts. The group began construction of an airship called the Prydwen, using parts from the Enclave mobile crawler at Adams Air Force Base. The development and construction process took a total of six years.

The Brotherhood sent three scout missions into the Commonwealth. First, an unnamed recon squad volunteered to go into the Commonwealth, then Recon Squad Artemis led by Paladin Brandis and Recon Squad Gladius led by Paladin Danse. The first scout team was successful. They brought back crates full of pre-War technology and documents and the first post-War reconnaissance of the area.

Artemis had problems beginning at their drop-off point in Malden. Ambushed by Gunners straight off the Vertibird, which resulted in abandoning and manually shorting out their power armor and the deaths of four knights. The survivors made their way to the National Guard training yard to regroup, which was infested with feral ghouls and resulted in the death of another knight. Brandis and his scribe left to investigate the pre-War Revere satellite array, but super mutants overcame them and claimed the second last member of the team. The only survivor was the commanding officer, Paladin Brandis, who made his way to a pre-War nuclear bunker and took shelter.[2]

Recon Squad Gladius subsequently entered the region also looking for technology and valuable documents. They encountered similar resistance from raiders as Artemis did and over the course of several weeks managed to secure a base of operations at the Cambridge Police Station but lost four knights in various confrontations.

After discovering advanced signals originating from the Institute, the Prydwen traveled to the Commonwealth. The Brotherhood established its headquarters Boston Airport. The vessel serves multiple roles for the Brotherhood, including those of aircraft carrier, command center, clinic, personnel quarters, equipment maintenance bay, and research facility.[3] In plotting a course to find, access, and destroy the Institute, Elder Maxson determined the first initiative to be repairing Liberty Prime back to working order.[4]

Apart from the three orders, Knight-Captain Cade resides in the medical bay, treating wounded soldiers and assessing new recruits in order to see if they're combat-ready. Cade is the one who refuses to clear Paladin Brandis for duty until the Sole Survivor completes either The Nuclear Option for the Brotherhood or completes the Mass Fusion quest for the Institute while working for the Railroad. Lancer-Captain Kells commands the Brotherhood's aerial units as well as controlling the flight path of the Prydwen from the command deck.

The Brotherhood of Steel appears in Fallout 4. 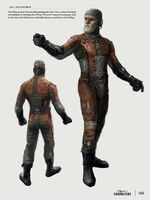 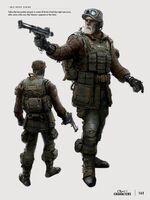 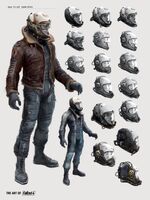 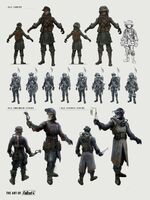 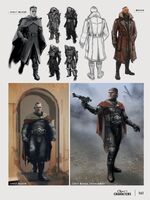