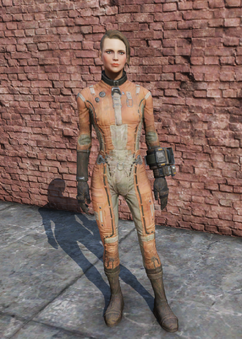 Brotherhood knight suit is an underarmor in Fallout 76.

A one-piece, tight-fitting orange jumpsuit worn by knights of the Brotherhood of Steel. A series of straps and clasps cover the outfit, suggesting its intended usage and synergy with power armor. The suit comes paired with brown gloves and simple laceless boots.

Although appearing to be optimized for use while operating power armor, the jumpsuit has been adopted by the Brotherhood as a uniform of sorts for operators of the exosuits. As the jumpsuit itself offers little protection, it is often worn with combat armor marked with the faction's insignia. The suit shares its appearance with the Brotherhood soldier suit as well as the darker Brotherhood officer suit.

Retrieved from "https://fallout.fandom.com/wiki/Brotherhood_knight_suit?oldid=3481765"
Community content is available under CC-BY-SA unless otherwise noted.