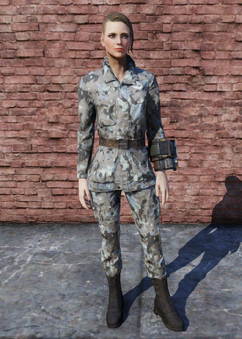 The Brotherhood fatigues is an underarmor in Fallout 76.

The Brotherhood fatigues are an underarmor which consist of a four color digital camouflage pattern printed on pants and a four pocketed field jacket supported around the waist by a leather belt. The Brotherhood have repurposed these uniforms and added their insignia above the left breast pocket.

This section is transcluded from Brotherhood of Steel underarmor linings. To change it, please edit the transcluded page.

From Fallout 76 patch 1.3.3.24 to patch 1.3.3.31, the Brotherhood fatigues were not considered an underarmor, rather, they became an outfit, no longer supporting any modifications. This was corrected with patch 1.3.3.31's hotfix.

Retrieved from "https://fallout.fandom.com/wiki/Brotherhood_fatigues_(Fallout_76)?oldid=3331504"
Community content is available under CC-BY-SA unless otherwise noted.