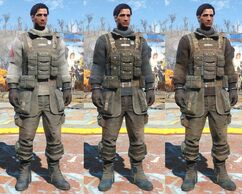 The Brotherhood fatigues is a piece of clothing in Fallout 4.

The Brotherhood fatigues are a series of fatigues worn by members of the Brotherhood of Steel. They are identical to the field scribe's armor, except that they are a different color and lack a backpack.

The fatigues are comprised of a military sweater, pants, gloves, a large vest, and what appears to be military webbing. The entire uniform is saturated with pouches; some are included on a chest panel on the webbing, with more on the belt and vest, one on either pants thigh, one on each pants leg just above the boot (secured by straps), and one sewn on to the left shoulder of the sweater. Each vest has a segment of utility cord or rope over the shoulder of the vest, and another on the back of the belt.

There are three variants of fatigues. The first has a black sweater and is the standard variant used by most Brotherhood personnel. The second has a navy blue sweater and is worn by Lancer Captain Kells. Additionally, emblazoned on the left breast of the vest is Knight Captain rank insignia. The final variant is a set of medical fatigues, worn by Knight Captain Cade and Larsen. It features, on the right shoulder, a customized (presumably Brotherhood) version of the caduceus in red. Additionally, it features the same Knight Captain insignia as the uniform worn by Kells.

The variants you can pickpocket from Kells and Cade (along with Kell's airship captain's hat) will respawn on them over time, allowing you to get multiple copies and keeping them from running around naked for the rest of the game.

It appears that the non-unique variants of the Brotherhood fatigues do not give the stated 10 energy resistance (could also encompass unique-variants.) [verified]

Retrieved from "https://fallout.fandom.com/wiki/Brotherhood_fatigues_(Fallout_4)?oldid=3463924"
Community content is available under CC-BY-SA unless otherwise noted.