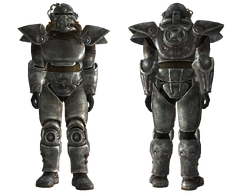 The Brotherhood T-51b power armor is a piece of armor in Fallout: New Vegas.

This armor acts as a Brotherhood of Steel disguise, which will provoke hostility with NCR personnel until having peacefully completed the Brotherhood section of For the Republic, Part 2.

In response to Ricky claiming they killed a Brotherhood of Steel paladin but shooting through the helmet eyeslit, the Courier replies that the eyeslits of T-series power armor are bullet-proof.[6]