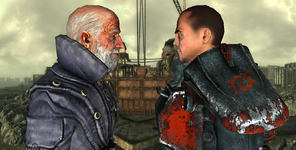 The doctrinal conflict between Owyn Lyons and Henry Casdin

“Tensions continue to mount between the courageous forces of the Brotherhood of Steel and their estranged brethren, the Outcasts.”— Three Dog, Fallout 3

The Schism, also known as the Brotherhood Civil War, was a cold, civil war between the Lyons' Brotherhood of Steel and a splinter group, the Outcasts in the Capital Wasteland. Following a drastic shift in mission profile by Owyn Lyons, a large group of Brotherhood loyalists broke off from Lyons' chapter, forming their own: the Outcasts.

Under Lyons' command, segments of knights and paladins became dissatisfied with Lyons' focus on protecting the capital and its inhabitants from super mutants, seeing it as an ineffectual waste of men and resources that would ultimately destroy the Brotherhood before their new goals were ever achieved. The situation gradually worsened, finally tipping when Elder Lyons ignored their repeated requests to recover tech from Fort Independence, a pre-War scientific military base.[3] Rallying behind Paladin Henry Casdin,[4] the dissenters abandoned Lyons' command and left the Citadel, taking a large part of its weapons and equipment stockpiles with them. Lyons lost more men to the Outcasts overnight than he did to the super mutants over the previous 23 years.[5][6] The loss of men and materiel had a significant negative impact on the combat performance of Lyons' chapter, greatly reducing its ability to project their power throughout the Capital Wasteland.[4]

Under Casdin's command, the rogue scribes, knights, and paladins seized Fort Independence, where they pushed back the indigenous raider groups and adapted the former military base for use as their main headquarters. Termed "Outcasts" by their angered former brothers and sisters, the renegade soldiers adopted the name as a badge of honor,[7] painting their armor red and black to distinguish themselves from the organization they no longer see fit to serve.[8]

A year after the split, the Outcasts organized a system of regular patrols, scouring the wasteland for technology, and began to excavate several locations, including the Virtual Strategic Simulations facility, in order to complete the original mission objectives. Ultimately, they plan to regroup with loyalist chapters in the West, though by 2277, they are stuck protecting Fort Independence and their considerable stockpile of powerful technology.[9] Morale is low among the Outcasts, with members missing the life they had living at the Citadel.[10]

The Outcasts are all highly-trained Brotherhood veterans with decades of combat experience under their belt. Together with the weapons and armor they confiscated, they remain a force to be reckoned with. Their tech recovery patrols also give them an ever-increasing stockpile of equipment on which to draw, including a significant number of combat robots to augment their relatively small numbers.

Despite the advantages they have over Lyons' mixed force of locally trained recruits and veterans, Outcasts do not seek to exploit it and do not engage Lyons' forces. They focus on their mission, covering much of the wasteland outside D.C. and, ironically enough, making it that much safer due to the prejudice with which they exterminate any threats.

However, if confronted with a Brotherhood patrol, the Outcasts will attack and fight until either side is dead. The frequency of these encounters increased after Project Purity went online in 2278 and the Brotherhood of Steel began assisting with aqua pura deliveries across the Capital Wasteland, thus taking them into territory held by the Outcasts.

Shortly after 2278, Owyn Lyons died. His daughter Sarah Lyons was appointed elder but fell in battle a short time later. The leadership of Lyons Brotherhood of Steel bounced from one incompetent elder to another, weakening an already weakened chapter. It wasn't until 2282 that a battle-hardened Arthur Maxson, who had recently stopped a reformation of the Capital Wasteland's super mutants, was appointed as Elder of Lyons' Brotherhood of Steel. At 16, Arthur Maxson brokered a peace between the Outcasts reuniting the East Coast Brotherhood of Steel into one chapter.[2] While the Brotherhood would rededicate itself to the pursuit of dangerous technology, rather than protection of the wastes, they would keep open recruitment policies, and continue the distribution of free-water from Project Purity.

Though the outcome of this civil war is known; ended with a peace treaty and reformed into another chapter of BoS in 2283 with Outcasts, it was notable enough to gain the attention of the Western Brotherhood chapters, though they, themselves, took no action. Veronica Santangelo, a scribe in the Mojave chapter, will make comment about the conflict four years later.[11]

Retrieved from "https://fallout.fandom.com/wiki/Brotherhood_Civil_War?oldid=3382406"
Community content is available under CC-BY-SA unless otherwise noted.