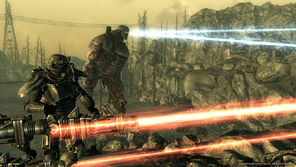 “We stand now, at the precipice. Our great nation once more threatens to crumble, to topple into the sea of lawlessness and despair that has ruled us all for over two hundred years. In short, my dearest America - we are at war. Even as I speak these words, fearless Enclave soldiers are fortifying their positions at the great water purifier, bracing for an inevitable assault. The Brotherhood of Steel, in their arrogance, has claimed Project Purity as their own! They would steal the Enclave's work, steal America's water! It is only a matter of time before the traitors march on the purifier, and attempt to take it by force. Let them come! Wave upon traitorous wave will crash against the Enclave's walls! The Brotherhood of Steel will fail! All those who oppose the Enclave will fail! I am President John Henry Eden, and this is my pledge -- no one, NO ONE will take this great nation away from me! God bless the Enclave! God bless America!”— John Henry Eden

The Brotherhood-Enclave War was a military conflict in 2277 between the Brotherhood of Steel and the Enclave.

In 2257, the Enclave commenced an indirect propaganda campaign against the Brotherhood. The Enclave, now under the leadership of President John Henry Eden, plotted in secret at Raven Rock. For twenty years, there was no interaction between the two factions, leading many to suspect that the Enclave radio broadcasts were on an old loop. However, in 2277, Colonel Augustus Autumn led an attack on the Jefferson Memorial, and took over Project Purity, as part of their plan to "purify" the wasteland. James was among those killed, but the Lone Wanderer and other survivors escaped to the Citadel.

The Brotherhood Outcasts were also attacked by the Enclave on patrols. Occasionally, the Outcasts would also launch attacks against the Enclave, but these were fairly unorganized. Protector Henry Casdin largely left the Outcasts out of the war.

After the capture of the Jefferson Memorial, the Enclave begin their conquest of the Capital Wasteland, establishing many small outposts and checkpoints throughout the region. They even try to access Vault 101, only to be denied entry by its isolationist overseer.

The Brotherhood set out on collecting evidence that Project Purity could function, in order for them to reclaim the Memorial. The Enclave caught onto this, kidnapping the Lone Wanderer in Vault 87 and confiscating the G.E.C.K.. The Lone Wanderer awoke in captivity inside Raven Rock and was interrogated by Colonel Autumn. President Eden then distracted Autumn and sent him elsewhere, summoning the Lone Wanderer to his office. It was here that the President was revealed to be a ZAX supercomputer. The former recruited the Lone Wanderer to act on his behalf, giving them a vial of Modified FEV to insert into the purifier which would cleanse the wasteland of all life forms that had been exposed to too much radiation. Eden then facilitated their departure from Raven Rock.

After the Brotherhood received word that the Enclave possessed the means to activate the purifier, they launched an offensive to reclaim the Memorial with the support of Liberty Prime. The Brotherhood forces and the Lone Wanderer stormed the memorial and confronted Colonel Autumn, although his fate is not known. The purifier was then started. Two weeks later, the Brotherhood started delivering the water throughout the wasteland.

The Enclave, after its defeat, made a last stand at Adams Air Force Base. When the Brotherhood invaded the Enclave's satellite relay station, the base was destroyed, but Liberty Prime was also eliminated by an orbital missile strike, a major blow for the Brotherhood. The Lone Wanderer scoured the ruins of Old Olney to retrieve a Tesla coil to assist in the scribes' research in Tesla cannons - the Brotherhood's last chance of countering the Enclave's Vertibirds. After creating the Tesla cannons, they launched a final attack on Adams AFB. The Enclave put up a tenacious final stand, but were ultimately annihilated by the Brotherhood's forces.

The launch terminal for the Bradley-Hercules orbital satellite indicates that the Enclave had given themselves the means to eradicate the settlements of Megaton and Rivet City. They also had Project Purity and the Citadel selected as potential targets. The Lone Wanderer can target Adams' mobile base crawler and decimate the Enclave. (Alternatively, the Citadel can be targeted resulting in the destruction of both the Brotherhood's headquarters and the majority of their forces in the Capital Wasteland, as well as the destruction of the Enclave at Adams Air Force Base).

In Fallout 4, it is confirmed that the Brotherhood of Steel have taken control over Adams Air Force Base, the Enclave's mobile base crawler having been destroyed. As a result of this, the Brotherhood has gained access to all of the facility's spoils of war.

The Brotherhood of Steel would win the war against the Enclave in the east, their mobile base crawler being destroyed by the actions of the Lone Wanderer; its destruction being a decisive blow. Adams Air Force Base would become a major staging area for the Brotherhood where they would construct the airship Prydwen from recovered Enclave technology, a process which would take a total of 8 years. As well as this, the Brotherhood now had access to what remained of the Enclave's VB-02 Vertibird fleet, upgrading them for transit aboard their newly built airship.

The Maxson bloodline would continue into the late 23rd century, as Arthur Maxson is alive by 2287; now commanding the rank of Elder of the Brotherhood of Steel in the east. That same year, he would mobilize part of his forces and carry out an expedition north towards the Commonwealth, with the aim of destroying the Institute, discovered by Brotherhood recon teams sent into the ruins of Massachusetts previously. The expedition to the Commonwealth was made possible largely in part to technology recovered from the war with the Enclave; namely access to Vertibird gunships as well as other resources re-purposed to build the Prydwen, the pride of Maxson's Brotherhood of Steel.

Retrieved from "https://fallout.fandom.com/wiki/Brotherhood-Enclave_War?oldid=3129032"
Community content is available under CC-BY-SA unless otherwise noted.