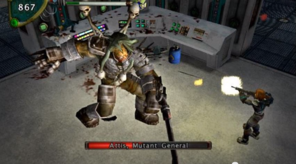 The Brotherhood-Attis War was a military conflict between the Texas Brotherhood of Steel led by High Elder Rhombus and the super mutant army led by Attis. It began in 2208 and ended in 2209.

Attis was one of the commanders of the faction of super mutants who fled to the east after the death of the Master and the destruction of Mariposa Military Base. They began to draw attention to themselves, and Rhombus, the high elder of the Brotherhood of Steel, thinking they were a threat, demanded during the elder council that the Brotherhood look into it. But the elder council answered in the negative, because the former expedition grew by similar ambitions (track down and assess the extent of the remaining super mutant threat) against the Gammorin's Army, and the incident ensuing divided the Brotherhood, creating a splinter faction of the Brotherhood of Steel.

However, Rhombus did not listen to the elder council, and began a crusade against the Attis Army. With some scribes and paladins, he mounted a new expedition which was later named Texas Expedition and began tracking the Attis Army. They followed their trail to Texas and there, he discovered the prototype Vault: an abandoned Vault prototype dedicated to the Secret Vault project and installed the main base of the Brotherhood of Steel in Texas.

The Attis Army searched for clues regarding the history of FEV before trying to make the Master's plan a reality and learned about a secret Vault-Tec installation called the Secret Vault. This was a Vault-Tec private Vault with new and possibly improved versions of the FEV virus. During the travel, the army came across the Carbon Mill and encountered Jane, the raider matron of the largest and powerful raider gang of Texas, who offered to sell slaves regularly.

Afterward, the army traveled to the ghoul city of Los in Texas, where the Secret Vault was located. Their first goal was to rebuild the mutant army and develop a cure for mutant sterility. The Secret Vault gave Attis hope, as the Vault scientists' research was dedicated to improving the original FEV in order to maintain reproductive functions.

Arriving in Los, Attis attempted to negotiate with the Church of the Lost, the cult that controls the city, but in vain. Sometime later, a contingent of paladins of the Brotherhood of Steel lead by Rhombus arrived and a battle broke out between the Attis Army, the Church of the Lost, and the Brotherhood paladins. The Brotherhood of Steel group was annihilated and Rhombus was captured. Attis used this confusion to his advantage and managed to get inside the Secret Vault. However, his army remained blocked at this level as they could not gain access to the lower level, which required a key card.

Triggering a siege on the city to get the key card and go to war with the Church of the Lost, Attis continued to prepare his plan. Later in 2209, the Initiate ventured into Los, destroyed the weakened Church of the Lost, killed Blake (the high priest of the cult), and arrived at the Secret Vault to destroy both the Attis army and the Secret Vault with the key card stolen and hidden by Rhombus. The Initiate killed many soldiers of Attis' army and entered the Hub chamber of the residence area.

Attis had penetrated deeper into the Vault, until the last section of the laboratory, and in the laboratory core, he had found the Vault-Tec modified FEV. Just before the Initiate arrived and attacked Attis, he tested it on himself and found that the FEV was unable to make mutants fertile. However, an unforeseen consequence followed, revealing another side-effect of the Vault-Tec modified FEV; it led to strange side effects, and Attis' skin turned darker. During the battle, Attis exploded and decomposed into strange organic biomass, a rapidly-multiplying multicellular organism that covered the entire laboratory section of the Secret Vault.

In his gigantic form, Attis tried to make the rest of the Attis Army found in the Secret Vault "join" him, but they were scared of him and began to fight back. After the Initiate found the Vault's nuclear warhead, he triggered it and escaped with a monorail, destroying the Attis Army, Los, and the Secret Vault.

Following their success in the war against Attis, the Brotherhood would continue to operate in Texas, expanding to bases in Fort Worth, and the Alamo.