Brooks tumbleweed ranch is a location in the Mojave Wasteland in 2281. It is located north of the remains of Highway 95. It is one of the most northern locations on the map, located slightly northwest of the Horowitz farmstead.

The ranch consists of a kitchen, living room, storage area, and a bedroom. A cattle prod can be found on a second floor dresser. The items in the ranch are considered owned, resulting in a loss of Karma if taken. True to its name, two tumbleweeds can be found inside the shack, one on the sofa and the other on a bed. Both cannot be picked up and moved.

Behind the ranch is a cattle pen, which is seemingly empty, along with a few more tumbleweeds drifting idly in the breeze. When approaching the pen, a nightkin will uncloak and offer to sell "wind-brahmin" to the Courier, which starts the unmarked quest Wind-Brahmin Wrangler. In front of the pen is a dead wastelander. 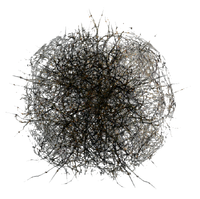