Brooks, synth designation L7-92, is a synth living in Far Harbor who greets new arrivals on the Island in 2287. He owns and runs the Bait Shop on the docks.

One of the synths that escaped from the Institute to Acadia, Brooks remains at Far Harbor to greet new synths who escape from the Commonwealth.[1] He is one of the last few, known individuals to see Derrick alive before he was killed by trappers.

Brooks appears only in the Fallout 4 add-on Far Harbor. 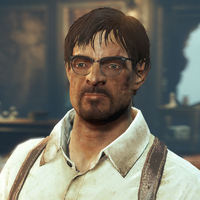