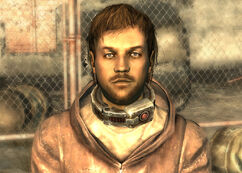 Bronson is a slave being held in Paradise Falls in 2277.

Bronson is, quite simply, a drunk. Unable to cope with life since his capture, he's taken to humiliating himself for the amusement of the slavers, who provide him with enough booze to make him forget how his life has ended up. Bleak has been trying to give him hope, but so far has failed.[1]

Bronson is locked up in the Paradise Falls slave pen, spending his entire life there until he is killed or has escaped.

When first interacting with him, he offers to show the Lone Wanderer something funny, or asks if they wish to hear a song or see a dance, but only in exchange for booze. However, the player cannot give any alcohol and therefore cannot exchange booze for anything.

Bronson appears only in Fallout 3.

Retrieved from "https://fallout.fandom.com/wiki/Bronson?oldid=3410847"
Community content is available under CC-BY-SA unless otherwise noted.