Patch 1.5 (PC/Xbox 360)
Patch 1.6 (PlayStation 3)
“Continue your existing Fallout 3 game and finish the fight against the Enclave remnants alongside Liberty Prime. Broken Steel moves the level cap for your character from 20 to 30, allowing you to experience even more of the game, including new perks and achievements.”— Official description

Broken Steel is the third add-on for Fallout 3, developed and published by Bethesda Softworks.

Broken Steel was initially released exclusively as downloadable content on Xbox Live and Games for Windows Live on May 5, 2009. After difficulties with the initial download for PC users, it was re-released for Games for Windows Live on May 7, 2009. It was made available for PlayStation Store on September 24, 2009. For Xbox 360, download codes for Xbox Live are also available in retail.

In this add-on, the Lone Wanderer joins the ranks of the Brotherhood of Steel to rid the Capital Wasteland of the Enclave remnants once and for all. The pack allows them to get to see the fruits of their father James' work, Project Purity's completion, and clean water flowing into the tidal basin for the first time in centuries.

Broken Steel's quest line is of the same length as the ones in Operation: Anchorage and The Pitt. Unlike those add-ons, in order to access the new story content from Broken Steel, the main storyline from the base game has to be finished.

In addition to extending the game to let players survive their adventures after the end of the main quest, the Broken Steel add-on raises the level cap to 30. The level cap expansion will take effect upon installation of the add-on, so players previously stalled at level 20 will once again accumulate XP, even if they haven't finished the main storyline.

Broken Steel also adds new side quests, most of which have to do with escorting freshly processed clean water across the wasteland and protecting it from raiders. Broken Steel takes about five hours to complete and side missions could take up to an hour to finish.

The player character's actions throughout Fallout 3 are woven into some of the quests in Broken Steel. For example, if they decided to infect Project Purity with the modified FEV, it will affect how the Capital Wasteland looks as well as the interactions with the local inhabitants.

* There are two versions of this weapon. One uses the Explosives skill, the other Small Guns.

Fighting at Adams Air Force Base

A hangar at Adams Air Force Base 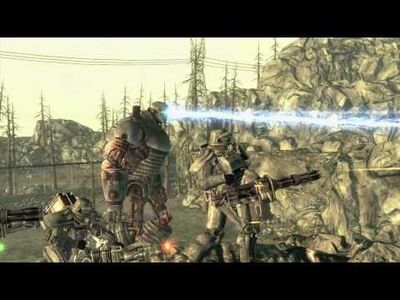