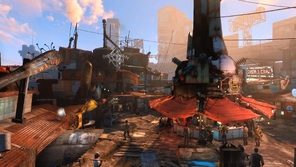 The Broken Mask incident was a sudden outburst of violence perpetrated by Diamond City visitor Mr. Carter against individuals around the market bar in May 2229.

According to eye-witness Eustace Hawthorne, one evening a man named Mr. Carter joined a group of patrons at the town's central bar. Claiming to be from out west, he struck up conversation, sharing stories about the state of the Commonwealth with the rest of the individuals that had gathered at the establishment.[1]

The group enjoyed several drinks together over the course of the evening, until Eustace noticed Mr. Carter's smile suddenly faded, and his cheek began to twitch.[1] As his cheek began to twitch, Mr. Carter unexpectedly pulled out his revolver and, without emotion or hesitation, shot the bartender Henry in the head. With his cheek still twitching, Carter continued to execute several other individuals.[2] As the city guards arrived and opened fire, Carter continued his frenzy, "tossing people left and right." He was eventually "put down" by security.

Inspection of his corpse revealed an undisclosed amount of plastic and metal, revealing Carter was not human but instead an advanced synth created by the Institute.[1] When the Director of the Institute learned of the situation, they were furious. Carter had not been approved for field testing and was sent to the surface without authorization. As the incident threatened decades of work to keep the organization "out of the spotlight" in the Commonwealth, the Director sought to identify those responsible.[3]

The reverberations of the incident are still felt nearly sixty years later in both Diamond City and the greater Boston Commonwealth.[4] By 2287, the fear of neighbors and family members being replaced by synths is significant, having grown into far-reaching and widespread paranoia.[5][6][7] The sentiment has recently escalated due to unexplained disappearances of citizens such as Charlie Fallon.[8][9] A facility known as Compound was founded by Roslyn Chambers, who lost her parents in the incident, dedicated to the identification and complete eradication of synths.[10]

The Broken Mask incident is mentioned only in Fallout 4.