After the destruction of the air purifier, mine entrance blocked

The Broken Hills uranium mine is worked by the town's super mutant population. The radiation in the mine has minimal effect on them and their great strength aids in the physically taxing labor. The mine requires an air purifier, as the toxic gas build-up causes the mine to become inoperable unless it is regularly filtered. The town's lifeblood comes from the uranium mine.

The mine consists of several tunnels and creatures within, including giant ants, radscorpions, and a lesser deathclaw. At the end of the mine shaft is an air purifier. However, a part is required to fix it. There is also a secret section of the cave just beyond the entrance, after turning to the right. Walk past the rock formation to find Chuck Stodgers and a footlocker.

The Broken Hills mine appears only in Fallout 2.

Chuck Stodgers is a pop-culture reference to Buck Rogers. Finding him earns 1000 XP. Gain another 500 XP for answering "Who are you?". 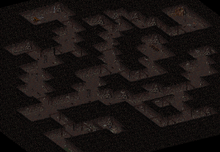 Broken Hills mine map
Add a photo to this gallery
Retrieved from "https://fallout.fandom.com/wiki/Broken_Hills_mine?oldid=3318904"
Community content is available under CC-BY-SA unless otherwise noted.