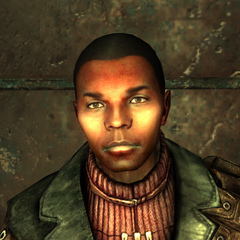 Brock without his head wrap

“I'm Brock, the bouncer. I take care of the troublemakers. You aren't going to be a troublemaker, are you?”

Brock works as a bouncer at the Muddy Rudder in Rivet City. He intervenes at the slightest sign of trouble.

During the day, Brock can be found in the Rivet City market, usually in the morning. He will eat at Gary's Galley and wander about the flight deck in the afternoon for a while. After that, he works at the Muddy Rudder and goes to sleep in the side room of the establishment.

Brock appears only in Fallout 3.

Retrieved from "https://fallout.fandom.com/wiki/Brock?oldid=3483520"
Community content is available under CC-BY-SA unless otherwise noted.