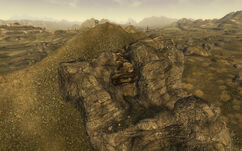 The broc flower cave is a small cavern in the Mojave Wasteland in 2281. It is located east of the Legion raid camp and southwest of Snyder Prospector Camp.

Many portions of the cave are slightly radioactive and contain pre-War toxic barrels. At some point in the past, a lab was set up on one of the radiation-free ledges.

The entrance opens to a path leading down. A short distance from the cave opening, a Salesman Weekly can be seen on the floor. The path splits shortly thereafter. To the left, a cavern full of radioactive barrels containing a skeleton, a knife, a copy of Lad's Life, an ammunition box, and a .357 Magnum revolver, can be found in the center. The right path forks again after the descending path winds past several minecarts and barrels. The path levels out into an open cavern.

The right fork follows a ledge with a view overlooking the main cave chamber, then leads to a recessed room containing a broken fence. A unique varmint rifle, Ratslayer can be found alongside a Sunset Sarsaparilla crate, a radiation suit, and medical equipment are stored behind the fence. A collection of chems are found here, including stimpaks, Med-X, RadAway, and Cateye.

A copy of Today's Physician and two copies of Programmer's Digest are located on top of and to the right of a desk. The left path leads to a final cavern, where Jane's brahmin will spawn for the Debt Collector quest.

The broc flower cave appears only in Fallout: New Vegas.