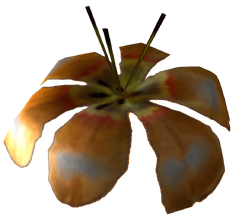 +1 Hit Point per second for 4sHardcore mode only:
-5 Starvation

Broc flower is a food item in Fallout: New Vegas.

The broc flower grows on broc plants, and it is an ingredient in three crafting recipes, including healing powder, stimpaks, and Turbo.

Broc flowers strike a strong resemblance to the real world desert globemallow, native to the Mojave Desert, Sonoran of Mexico, and Great Basin of California. The plant was used by Native Americans as a food source and medicinal plant.

Retrieved from "https://fallout.fandom.com/wiki/Broc_flower_(Fallout:_New_Vegas)?oldid=3382669"
Community content is available under CC-BY-SA unless otherwise noted.