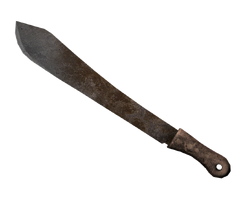 The broad machete is a unique weapon in Fallout: New Vegas. It was a pre-order exclusive close-combat weapon, included with the Tribal Pack, before the release of Courier's Stash. It is significantly stronger than the normal machete favored by members of the Legion.

The broad machete has a unique world model and an appearance that sets it apart from other machetes with its the bolo-style blade, compared to the makeshift design used by the Legionaries. It also has a unique Pip-Boy icon when selected. The broad machete has considerably higher DPS, especially at higher levels, and a higher base damage as well. Its forward power attack is faster than other melee weapons. These factors make it perform well for melee-based characters, especially early on.

Unlike most other one handed melee weapons, it does not have the "Back Slash" special attack.

The broad machete can successfully strike about 370 times from full condition before breaking.

Originally, the only way to acquire this weapon was by redeeming the code that came with the pre-order exclusive Tribal Pack. It can now also be acquired by purchasing the add-on Courier's Stash.