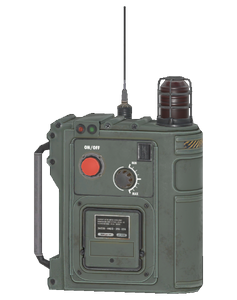 Ally: Bring Home the Beacon is an ally quest for Sofia Daguerre in the Fallout 76 update Wastelanders.

Commander Daguerre asks the resident to investigate a suspiciously powerful USSA radio beacon she detected in Appalachia. While most radio beacons burn out fast, with only enough power to last for a year at most, this one continues broadcasting at full power. Someone must be replacing its power source periodically.

The second fetch quest in Daguerre's storyline, this one sends the player character out to collect the USSA beacon from an Appalachian location (eg. the Valley Galleria). The device is located in a steamer trunk in the 'Valley's Boutique' shop upstairs in the shopping center. Upon recovering it and returning to Daguerre, she will reveal that her scanner picked up another USSA signal - two, in fact, but they disappeared briefly and only one reappeared. The player character is sent to investigate.

The quest's name is a play-on-words of the phrase "Bringing Home the Bacon," which means to earn money and become successful.

Retrieved from "https://fallout.fandom.com/wiki/Bring_Home_the_Beacon?oldid=3238174"
Community content is available under CC-BY-SA unless otherwise noted.