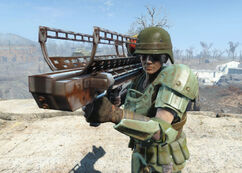 Captain Bridget is the leader a group of Gunners established at the Hub City Auto Wreckers in 2287.

Bridget is a Gunner captain in charge of the Gunner installation at Hub City Auto Wreckers. She oversaw the collection of intelligence gathered on nearby points of interest, including Longneck Lukowski's Cannery, Dunwich Borers, the Revere satellite array and Revere Beach station.

Bridget is armed with leveled armor and weapons. She has been seen in combat armor and power armor and armed with a laser rifle and a Fat Man. She spawns with a nearly-complete set of heavy combat armor, only missing the right arm.

Bridget appears only in Fallout 4.

Retrieved from "https://fallout.fandom.com/wiki/Bridget?oldid=3288677"
Community content is available under CC-BY-SA unless otherwise noted.