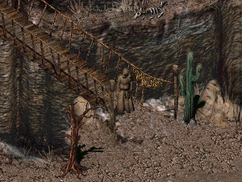 “Stop! Who would cross the Bridge of Death must answer me these questions three, 'ere the other side he see.”— Bridgekeeper

The Bridgekeeper is the guardian found during the special encounter Bridge Keeper.

The Bridgekeeper is a wild-eyed man with an unkempt beard, a raspy voice, and an oddly, smelly, filthy brown and purple garment made out of special fabrics. His robe possesses plasma burns and scorch marks all over it, alluding to a baffling quality of hardiness in the face of combat. His left eye looks like it is about ready to jump out of his head.

He alludes to working for some mysterious person that he calls his "Agent..." If he is alive at the end of the questions, and responded well to the Chosen One, he will mention his desire to change jobs because of the non-respect shown towards his person. He then goes into the topic of car repair, saying he hears that "That is where all the money is made these days."

The Bridgekeeper appears only in Fallout 2.

Appearance, dialogue, name and personality of this character is entirely based on the Bridgekeeper of the famous comedy movie Monty Python and the Holy Grail.

Retrieved from "https://fallout.fandom.com/wiki/Bridgekeeper?oldid=3340284"
Community content is available under CC-BY-SA unless otherwise noted.