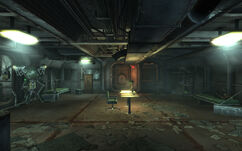 Middle level of the Bridge Tower, entrance to armory on the right

The bridge tower of Rivet City is home to the Rivet City Security Force and contains the sleeping quarters for the guards as well as a well-stocked armory.

The tower itself is home to the Rivet City Security Force. If Harkness is not killed/turned in during The Replicated Man, the player character can find Commander Danvers here.

The key to the armory is carried both by Harkness and Commander Danvers. A Mister Gutsy named Private Jones guards the door but it can be easily distracted with a successful Speech check. Harkness opens the armory door from time to time, but upon attempting to enter, Jones and Harkness will both attack the player character and lock the armory door. Inside there is also a hostile automated turret.

The bridge tower appears only in Fallout 3.

Armory interior
Add a photo to this gallery
Retrieved from "https://fallout.fandom.com/wiki/Bridge_tower?oldid=3444927"
Community content is available under CC-BY-SA unless otherwise noted.