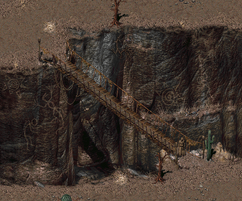 Monty Python and the Holy Grail.

“For some reason, I think I should save my game in a brand new slot.”— The Chosen One

Bridge Keeper is a special encounter in Fallout 2.

Minimum level to visit: 10. You're standing in front of a large chasm, spanned by a rope bridge that is blocked by a brown-robed figure. The Bridgekeeper, when approached, stops the Chosen One and demands that they answer three questions. The player character can answer or decline, however, leaving requires crossing the bridge; there is no exit grid on the near side, and, if the Chosen One has a Highwayman, it is inexplicably parked on the far side.

The Bridgekeeper's questions begin with "What is your name?" and "What is your quest?" The Chosen One can answer truthfully; the answers to the second all tend to be acceptably true, and will change depending upon the point they are at in the storyline. The third question is random among three questions, and are pieces of obscure Fallout trivia, usually based on the intricacies of the SPECIAL system.

If Intelligence is below 4, the conversation will be extremely confusing, but questions can still be answered. The Bridgekeeper will only ask two questions and help you greatly for the 2nd, giving the answer in the question. Also, it is the only way to indirectly kill the Bridgekeeper in the 1st question, asking him his name.

Retrieved from "https://fallout.fandom.com/wiki/Bridge_Keeper?oldid=3316510"
Community content is available under CC-BY-SA unless otherwise noted.