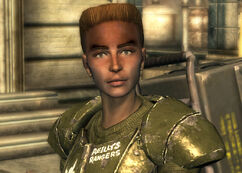 “Brick's the name, and I call this fine looking roomsweeper Eugene.”

Brick is the heavy weapons specialist in the Reilly's Rangers mercenary group in the year 2277. She is the typical grunt who likes nothing more than shooting her gun, and is the youngest of the Mercenary group.

Brick was born in 2253. As her team's heavy weapons specialist, Brick carries a minigun she has christened Eugene. She is muscle-bound and intimidating in appearance, and her only concern is what to point her gun at and vaporize next.[1]

One of the entries in Reilly's terminal implies that she frequently fights with Donovan.

* Only if one does not give her any ammunition.

Brick appears only in Fallout 3.

She seems to be inspired by the Marine Vasquez, from the 1986 movie Aliens, who has the same kind of gun, attitude, and haircut.

Retrieved from "https://fallout.fandom.com/wiki/Brick?oldid=3125026"
Community content is available under CC-BY-SA unless otherwise noted.