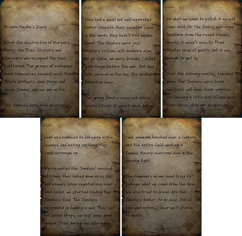 The note could be found inside Hawke's Refuge, in the room containing the steamer trunk, in front of the small radio. As of One Wasteland For All, the cave interior has been sealed off, as the Blood Eagles converted the location into the Dagger's Den. Thus, the note is no longer accessible.[verification needed]

After the destruction of Harpers Ferry, the Free Staters and Survivors who occupied the town scattered. Two groups of refugees found themselves headed west; Free State brothers Juan-Diego and Jesus Sunday, and me and my kin.

The Sundays were rich preppers, they had a small but well-appointed bunker beneath their vacation cabin in the woods they hadn't told anyone about. The Hawkes were just ordinary civilians with nowhere else to go. Once, we were friends. I dated Juan-Diego before the war. But now, with survival on the line, the brothers turned us away.

Our group found a cave set into a nearby hillside. It wasn't much, but we did what we could to patch it up, add some wood for the floors, scavenge furniture from the ruined houses nearby. It wasn't exactly Free Stater level of quality, but it was enough to get by.

Over the following months, tensions grew. The Sundays were living relatively well from their supplies and farming a little plot of land near their house, while our desperate band was reduced to foraging in the swamps and eating anything they could scrounge up.

We resented the Sundays' snobbish attitude, they looked down on us like wild animals. When negotiations over food failed, we started raiding the Sundays' field. The Sundays responded by building a wall. They set out lethal traps, we lost some good people. Then, during one late-night raid, someone knocked over a lantern, and the entire field went up in flames. Nearly everyone died in the ensuing fight.

The remnants of our band tried to salvage what we could from the fire. We also tried to break into the Sundays' bunker, to no avail. Out of food and options, I fear we'll starve to death.

Retrieved from "https://fallout.fandom.com/wiki/Brianna_Hawke%27s_diary?oldid=3320835"
Community content is available under CC-BY-SA unless otherwise noted.