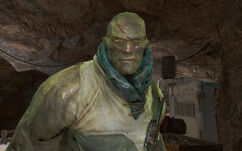 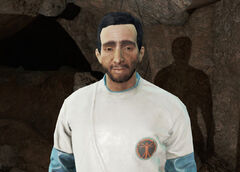 Virgil as a human.

“Before I had to escape, I was working on a serum that would serve as a cure for my... condition. I wasn't able to bring it with me. It's still in my lab, and... well, look at me. I need it.”

Dr. Brian Virgil (Institute username Virgil.B)[1] is a super mutant living in the Commonwealth in 2287. He can be found in the rocky cave and he helps the Sole Survivor find a way into the Institute.

Dr. Brian Virgil was a member of the Institute at some point before 2287. He was in charge of a project involving the Forced Evolutionary Virus and the creation of super mutants in the BioScience division. Virgil took control of the program after his predecessor, Dr. Syverson, passed away. Overcome with guilt from the pain and suffering he had inflicted on so many innocent people, he decided to leave the Institute. Virgil destroyed the lab equipment and all of the research, which is logged as "Incident V" in terminal entries. He then escaped the Institute, afterward infecting himself with a unique strain of FEV in order to survive the high levels of radiation in the Glowing Sea. The Institute was aware of his presence in the Glowing Sea[2] and sent Kellogg to kill him,[3] a mission that would never be carried out.

Virgil appears only in Fallout 4.

Retrieved from "https://fallout.fandom.com/wiki/Brian_Virgil?oldid=3471020"
Community content is available under CC-BY-SA unless otherwise noted.
... more about "Brian Virgil"
RDF feed
Has platform
PC +  and Playstation 4 +