Enclave (formerly)
Church of the Children of Atom

The Heretic
What Atom Requires
Visions in the Fog

“The island. You've seen the Fog. Heard the Geiger counter on your little bracelet pipe up? That is Atom, spreading His Glow across this land. And that Glow is the path to our salvation.”

Grand Zealot Brian Richter is the leader of the zealots and enforcer of Children of Atom laws on Mount Desert Island in 2287.

Lieutenant Brian Richter was not always the grand zealot. Far in the past, he was a soldier of the Enclave,[1] fighting for the glory of America in the Capital Region. The change came when a long-term scouting mission to recover a reserve of fusion cores went sideways. The disposal facility they tracked them to was still working. The containment cellar suddenly locked itself, due to a screw up by the team engineer. Fifteen inches of lead-wrapped steel slammed shut behind them and locked tight. Surviving on two sips a water and a bit of radroach per day, Richter watched his team fall apart and die. It wasn't until Zealot Tektus came along, breaking the seal on the door and pulling the sole survivor out. Nursed to health by the Archemist, Richter ascribed his survival to Atom's blessing and became a fervent defender of the faith.[2]

Richter is responsible for enforcing the laws of Atom and ensuring the security of The Nucleus. He also performs trials of loyalty, as the Sole Survivor can witness on their arrival at the Nucleus.[3]

Companions with origins in the Capital Wasteland, such as MacCready, will not comment on his Enclave past if they are brought along during the conversation trigger. 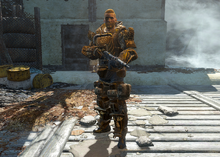 Retrieved from "https://fallout.fandom.com/wiki/Brian_Richter?oldid=3118035"
Community content is available under CC-BY-SA unless otherwise noted.