Brian Fargo was the founder of Interplay and was the head of the company when Fallout, Fallout 2 and Fallout Tactics were developed and published. While he did not work directly on any of the Fallout games; He was one of two of the producers for the first Fallout game, Fargo also worked on Fallout's predecessor - Wasteland as a director. The intros of all three of the aforementioned Fallout games include the words "Brian Fargo presents."

In February 2010, Brian Fargo mentioned that InXile Entertainment had been working on a game for Bethesda Softworks, which was later announced as Hunted: The Demon's Forge.

In 1984, Fargo founded Interplay Entertainment, where he worked on most of Interplay's early games (e.g. Bard's Tale and Wasteland). He was the company's CEO until 2002, when majority control of Interplay was acquired by Titus Interactive, and he left the company and was replaced as CEO by Hervé Caen.

In 2003, Fargo founded a new company, InXile Entertainment. In October 2004, InXile released The Bard's Tale for PlayStation 2 and Xbox. A version for Microsoft Windows was released in early 2005.

In 2003, Fargo finally acquired the rights to Wasteland. On February 29, 2012, Wasteland 2 was announced on No Mutants Allowed to be developed using fan-funds donated through Kickstarter.

In March 2017, Fargo had announced his plans to retire from inXile following the release of Wasteland 3.[1] However, in November 2018, Microsoft Studios announced their intention to buy inXile and make the studio a subsidiary. Because this would provide the studio with significantly more resources, Fargo stated no longer plans to retire but instead to continue to lead the company.[2]

Brian stated, in an interview with GamePressure in late May 2015, that "[Bethesda] did a great job with it. It’s not what the hardcore audience wanted which I totally get but I give them credit. They’ve made a meaningful perk and trait system, they did a great job with the visual style, use of Pip-Boy and music. They’ve captured what Fallout universe should feel like. But it was certainly different than my approach to it."[3]

In mid-October of that same year, Brian stated, in an interview with PC Gamer: "[Fallout 4]'s more action-oriented, so that makes it different than what I would have done, but that being said, it looks great," Fargo said during a recent chat. "They've captured a lot of the essence of what made the Fallout universe, and they really pour a lot of effort into little things, whether it's the crafting, or the personality or how many names the robot can speak. I tip my hat to the craftsmanship they've brought to the franchise."[4] 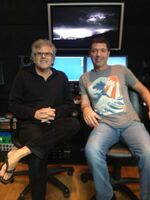 Brian Fargo and Interplay in 1987