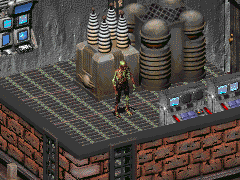 “I mostly just sit here and make sure none of the dials flip out. I make some minor adjustments. I flip some switches. That's about all. Anyone could do it.”

Brian is a ghoul resident of Broken Hills in 2241.

Brian is a squat man wearing squalid clothing, with a toothpick in his mouth and dirty fingernails.[1] He looks after the nuclear generator that powers the town, with its ready supply of uranium slugs.[2] Since the generator is an extremely simple machine to monitor and maintain, Eric notes that Brian is extremely lazy person, doing as little work as possible.[3]

Brian appears only in Fallout 2.

Retrieved from "https://fallout.fandom.com/wiki/Brian_(Fallout_2)?oldid=3369889"
Community content is available under CC-BY-SA unless otherwise noted.