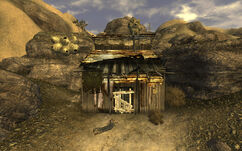 “And God said: let them have beer.”— Strategic Nuclear Moose

Brewer's beer bootlegging is a small shack in the Mojave Wasteland that has fallen into disrepair by the year 2281. The shack's interior leads to an underground bootlegging establishment, due west of the Sunset Sarsaparilla headquarters.

The man who lived here, Gourd, planned to market his own alcoholic beverage called Strategic Nuclear Moose. Unfortunately, the cazadores outside killed him before he could get the business off the ground.

Many cazadores and cazador nests are located around the shack. Upon entering the shack, directly ahead lies an Average locked door to an underground section of the shack. In the center of the first room is a campfire. Next to the locked door is a shelf with the key on top, next to some bottle caps and one Sunset Sarsaparilla star bottle cap.

The underground section contains an Average locked explosive chest with a generous amount of explosives. There is also a Hard locked gun cabinet that can be opened with a key found next to the chemistry equipment under a Big Book of Science in the opposite room. The gun cabinet contains various ammo types and a sniper rifle, or a Gauss rifle at higher levels.

At the bottom of the stairs, there is a shelf with an unlocked ammunition box. In this section of the room, there is a sign for "Strategic Nuclear Moose" advertised as a type of beer, with several beer bottles on a table near the sign.

The sign seen in the basement reads "Strategic Nuclear Moose," which is a reference to the real-life equivalent "Tactical Nuclear Penguin" produced by Scotland's BrewDog Brewery. At the time of the game's development, this beer held the record for the strongest beer in the world, with 32% alcohol by volume.[1]

Big Book of Science
Add an image to this gallery

Retrieved from "https://fallout.fandom.com/wiki/Brewer%27s_beer_bootlegging?oldid=3169903"
Community content is available under CC-BY-SA unless otherwise noted.