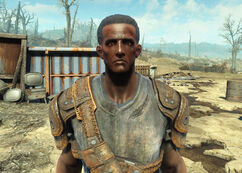 Brett Dunmore is a resident of the Dunmore homestead in 2287.

A former Gunner, Brett settled down with his wife and fellow ex-Gunner, Monique Dunmore, at their small homestead. His skill with a rifle ensures that raiders stay away, while his bartering skills keep his family supplied.

Brett Dunmore appears only in the Fallout 4 add-on Nuka-World.

Retrieved from "https://fallout.fandom.com/wiki/Brett_Dunmore?oldid=3249506"
Community content is available under CC-BY-SA unless otherwise noted.