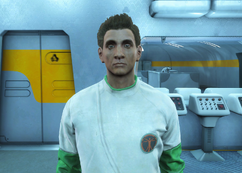 “Rosalind is as smart as she is beautiful. Just wish I could get her to notice me.”

Brendan Volkert is a scientist in the BioScience division of the Institute in 2287.

Brendan Volkert is the son of Dr. Dean Volkert living in the Institute in 2287. Brendan is an ambitious scientist wanting to stand out and impress his fellow scientists. While he wants to achieve such a goal, he lacks the skill, intelligence, and even the interest in science compared to his peers. He still attempts to impress his father by showing interest in his work. He is also trying to learn robotics from Liam Binet, but he finds it more complicated than he thought.

Brendan has feelings for Rosalind Orman, but cannot get her to even notice him. When he visits the advanced system division in an attempt to talk to Rosalind, Evan Watson asks him to leave. His father tells Brendan that he should stop going to the division so as not to serve as a distraction.

Brendan resents Dr. Watson due to this interaction. He assumes that Dr. Watson hates him, but his father disagrees and states that Evan just wants Brendan to refrain from distracting the scientists. Brendan also claims Evan Watson thinks he is not Institute material, but he promises that he will prove Watson wrong.

Brendan Volkert appears only in Fallout 4.

Retrieved from "https://fallout.fandom.com/wiki/Brendan_Volkert?oldid=3288673"
Community content is available under CC-BY-SA unless otherwise noted.