Breakheart Banks is a location in the Commonwealth in 2287.

Breakheart Banks was a small family farm on the banks of the Saugus River, recently overrun by super mutants.[1]

Breakheart Banks can be approached from the west and south, with the other sides consisting of a steep cliff into the river. There is a fortification garrisoned by a single super mutant and some mutant hounds. Nearby, there is a car near the north end, with tin can alarms suspended overhead and skeleton lovers in an eternal embrace.

Inside the shack there is a mattress, a weapons workbench, a steamer trunk, as well as a fridge stocked with corn cobs and mole rat meat. A cooking station can be used next to the cornfield. To the northwest a fishing boat is stranded. It has an interior that can be entered and is the source of the nautical radio signal.

Breakheart Banks appears only in Fallout 4.

Breakheart Banks is named after the real-life location Breakheart Reservation, which is in the same approximate location in the towns of Saugus and Wakefield.

Nothing to see here 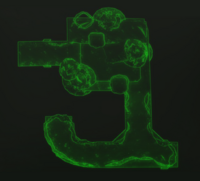