View source
watch 24:51
Fallout Interactive Experience
Do you like this video?
Play Sound
Fallout 2 side quest

1500 XP
-5 Karma (for doing the quest)
2500 XP
+20 Karma (for reporting to Marcus)
“This is a chance to keep humanity free, you know, from those vicious mutant bastards.”— Jacob the Chemist

Break Manson and Franc out of prison is a side quest in Fallout 2.

Before taking this quest, one may be interested in talking to one of the prisoners, Manson, and asking him about Broken Hills. There may be a long dialogue option in where he responds with "Wha'?" which gives 300 XP.[1]

Speak to Jacob the Chemist and tell him the Chosen One doesn't like the super mutants. He will tell them to break their friends out of jail.

Go to the jail and wait. Eventually, the super mutant standing guard will wander towards the door. At this time, one can pick the lock of the cells and free the two convicts. One can also steal the key from the guard, or barter for it (costs 0) and use it on the door when he leaves. Either way, the player character has to wait until the guard leaves to free them, as the nearby guard stops the player character otherwise. With a high enough Charisma and Intelligence (both need to be 7), the main guard can also be convinced to give the key and the prisoners can leave freely.

One has to take this quest before reporting about missing people in find the missing people for Marcus quest or the conspirators won't talk to the player character anymore.

The anti-mutant conspiracy goes on, and then Karma takes a hit. This also opens up the quest to blow up the mine's air purifier.

Once receiving this quest, one can instead turn Jacob into Marcus for 2500 XP. Alternatively, the Chosen One can perform the break, then turn them into Marcus. Jacob and his wife will end up in prison after a fade to a black screen. 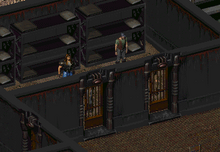 Jacob and his wife in jail after the tell-tale