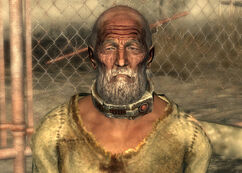 Breadbox is a slave in Paradise Falls in 2277.

A slave for thirty years, Breadbox is the oldest slave in the camp by far.[1] Old slaves don't sell well, and at this point, they can't even give Breadbox away. Mostly, the slavers just ignore him.[2]

Breadbox is a slave locked up in the Paradise Falls slave pen, and can be found there the entire day. If one is able to open the gate and free the other slaves, Breadbox is the only one that will not flee, making him the only slave that can only be found at the pens unless killed.

Breadbox appears only in Fallout 3.

Retrieved from "https://fallout.fandom.com/wiki/Breadbox?oldid=3163936"
Community content is available under CC-BY-SA unless otherwise noted.