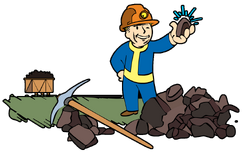 Event: Breach and Clear is an event quest in Fallout 76.

When the quest begins, all residents will be notified of the location where the Motherlode mining robot will be surfacing to drop off its latest haul of mineral scrap. Clear out the initial enemies in the area, usually mole miners, and the Motherlode will soon surface after warning player characters to stand clear of where it will emerge.

Once it surfaces, many of the containers on it will be marked by red lights. As the quest continues, several will change color at certain intervals. Ones marked by green lights are available immediately, but ones marked by yellow lights will be inaccessible unless a player character has the Hornwright senior executive ID to grant clearance to those containers. However, at those intervals, mole miners and other enemies will need to be eliminated before the Motherlode can unlock its next set of containers.

Once the Motherlode has unlocked its final set of containers, it will request that player characters collect all remaining loot from its containers before it submerges again. Once it submerges to begin collecting minerals again, the quest is completed.

Retrieved from "https://fallout.fandom.com/wiki/Breach_and_Clear?oldid=3164625"
Community content is available under CC-BY-SA unless otherwise noted.