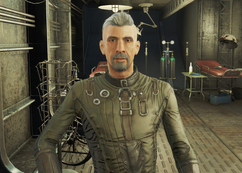 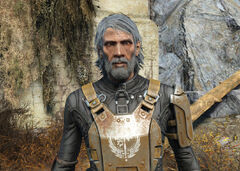 Brandis during The Lost Patrol

“Never did like this rustbucket. Oh, sure, the Prydwen's a fine ship, but put me in the field any day.”

Paladin Brandis is a paladin of the Brotherhood of Steel living in the Commonwealth in 2287.

Paladin Brandis was assigned to go to the Commonwealth as the commander of Recon Squad Artemis, with the objective of gathering pieces of pre-War technology and intelligence shortly before the arrival of Paladin Danse's team. His squad consisted of Knight Astlin, Scribe Faris, Knight Varham, himself and 2 other unnamed soldiers.

He was the only survivor of his squad after a series of attacks from various hostiles, which separated his squad, hence why their bodies are found in several locations in the quest The Lost Patrol.

Brandis can be found at Recon bunker Theta. If convinced to return to the Prydwen, then upon talking to him there he will thank the Sole Survivor and give them his gun, the Survivor's Special. Later on, Brandis will assist the Brotherhood with the assault on the Institute during Ad Victoriam and The Nuclear Option. Alternatively, he will participate in the raid on the Railroad HQ in the quest Precipice of War if the Sole Survivor follows the Railroad line of quests.

Paladin Brandis appears only in Fallout 4.

Retrieved from "https://fallout.fandom.com/wiki/Brandis?oldid=3062216"
Community content is available under CC-BY-SA unless otherwise noted.