Fallout 3
“I've finally found a quiet place for my family. We've been running from one settlement to the next, just trying to keep out of sight. Now that I'm on the other coast, I feel much safer.”— William Brandice

Brandice's house is the former home of the Brandice family located in Grayditch. It is across the street from the Wilks' house.

This floor consists of only a bedroom. Brandice's terminal (easy) is on the desk. Next to the terminal is a working radio playing Enclave radio suggesting that Brandice's father was either spying on the Enclave or used to be a soldier for them (possible suggested information from Bryan Wilks). Another terminal log mentions the gun hidden in the kitchen downstairs. The bed is not owned, and can be slept in. Also William Brandice's footlocker is to the left of the bedroom door.

Although Bryan Wilks states that William Brandice always used to stare out the window at their home and type, there is a window but it is now barricaded by wooden planks and the terminal is isolated inside a room.

Brandice's house appears only in Fallout 3. 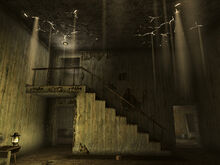