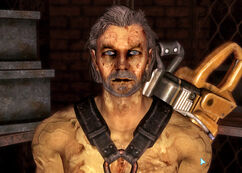 “Well, since you might be able to help me, I'll let you in on a little secret: the slaves are always planning all sorts of things. I find out what's going on and let the bosses know and they let me shrug off some of the work detail. Good deal, huh? If you hear anything, you should let me know.”

Slave Snitch: By speaking to him, one may reveal several secrets to him, including telling him about the riot Wernher is organizing. He gives 2 stimpaks and 25 XP per piece of information. Telling Brand any "info" gives negative Karma.

Retrieved from "https://fallout.fandom.com/wiki/Brand?oldid=3081344"
Community content is available under CC-BY-SA unless otherwise noted.