Brain fungus is a consumable item in Fallout 76.

A pale fungus whose physical appearance bears a striking resemblance to a brain. It can be consumed raw to satisfy a small amount of hunger with a medium dose of radiation and chance for disease or can be cooked for additional benefits.

When affected by a blast zone, it mutates into enlightened fungus which yields raw crimson flux when harvested.

Found predominantly in the Cranberry Bog region, southern half of the Mire, and specifically in the following locations: 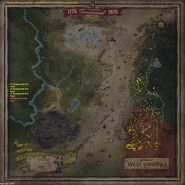