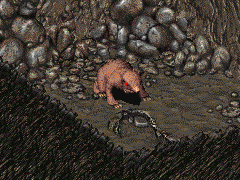 “(Sniff, sniff) Hmmm, I smell the distinctive aroma of Cheezy Poofs on you. You don't happen to have some to spare do you? I just love Cheezy Poofs.”

Brain is an intelligent albino mole rat with an enlarged braincase, the brother of Keeng Ra'at.

Brain is an unusually large, albino mole rat with an enlarged cranium and the look of an intelligent being[2]. He is the unlikely leader of the renewal cult in the ghoul town of Gecko and seeks to take over the world. He lives in an underground cave adjacent to the Gecko nuclear reactor. He loves cheezy poofs, and will ask to be given some if a visitor has any in their inventory as he can smell them.

In the short term, he seeks to build an alliance between Gecko and Vault City based on power from Gecko being sent to Vault City in exchange for medical research on how to "restore" the ghouls to humanity. The cult is symbolized by the ankh, and its members wear ankh necklaces. The renewal cultists seek to "renew," i.e. become human again.

The Brain can start all Gecko powerplant related quests, if they weren't already started by other means, and can give a few helpful pointers about them.

Brain appears in Fallout 2 and is mentioned in the Fallout Bible.

Retrieved from "https://fallout.fandom.com/wiki/Brain?oldid=3177591"
Community content is available under CC-BY-SA unless otherwise noted.