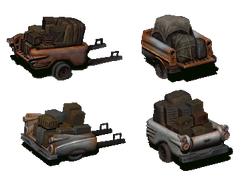 Brahmin carts are primitive vehicles often used by merchant caravans in New California. These wagons help make the network of caravans that crisscross the Wasteland both profitable and useful.

A typical cart is made from the salvaged parts of a private car, typically a light pickup truck. The engine block, cab, and all parts forward of the cargo box are sawn off, leaving the light metal rear cargo box and rear axle, as well as a pair of projecting frame rails. The brahmin is then hitched to these frame rails to pull the wagon. Salvaged tires are still used as wheels.

Most carts are approximately six to eight feet long and four to five feet wide, using the average human male as a size referent. This yields a ready-made cart that can accept large qualities of cargo. The limiting factor to a cart's load is the pulling strength of the brahmin to which it is hitched rather than the load limit of the suspension and tires. Cargo is typically tied down and covered in a tarpaulin, rendering what may well be valuable goods into a pile of dingy, nondescript blocks.

The hitch position of the brahmin and the gross weight of a laden cart lend to the vehicle moving slowly. No brakes or other control gear are in evidence, meaning that acceleration, deceleration, and maneuvering all fall to the hitch animal. Caravans bring many guards along to combat raiders, indicating that the carts themselves are incapable of outrunning threats encountered on the trail.

Carts are often found at every settlement of any appreciable size, typically with at least one or two guards loitering nearby. The constant ebb and flow of these carts from settlement to settlement keep trade in motion, delivering goods to settlements unable to produce them and making what little economy exists in the wasteland operate. 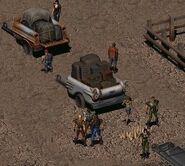 Two brahmin carts in the Hub
Add a photo to this gallery
Retrieved from "https://fallout.fandom.com/wiki/Brahmin_cart?oldid=3233878"
Community content is available under CC-BY-SA unless otherwise noted.