Brahmin are creatures found in the Commonwealth and Nuka-World in 2287.

Brahmin are two-headed cattle that mutated after the Great War. They still provide meat, milk, hide and manual labor. This makes them an integral part of any settlement, as well as the caravans that connect them.

Brahmin have the appearance of a pre-War cow but are distinguished by their abnormally large udders and two heads. They also have eight stomachs,[1] but otherwise do not differ significantly from their pre-War ancestors. Brahmin bulls, although not seen in any game to date, are said to have four testicles.[2][3] Additional mutations include the growth of several disfigured horns and coloration of the skin. Brahmin and radstags are the only creatures in the Commonwealth to develop a second head.

A brahmin feed trough can be built to attract brahmin to the area. Brahmin will stay close to the feed trough. Brahmin caravans are used by settlers (assigned by the player character) to provide supply lines between various settlements. They drop fertilizer that can be used for growing crops and is an ingredient for Jet, fireworks, explosives, and ammunition.

Brahmin are often found in company with a trader transporting goods and are very commonly seen in settlements.

Pack brahmin are loaded with luggage as they are used to transport goods. They are also livestock.

Desiccated brahmin, being fed on by a bloodbug

A pair of mounted brahmin heads 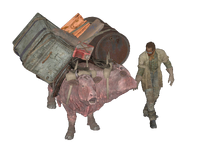 A pack brahmin with a provisioner making up a supply line