This section is transcluded from Brahmin. To change it, please edit the transcluded page.

Brahmin are one of the most important mutated species that emerged in post-nuclear America. Descended from the Indian brahman cattle variant imported to the U.S. for crossbreeding purposes, they developed two heads as a result of irradiation. These toasty brown critters were quickly adopted by survivors as the most versatile and capable livestock animal in the wastes.[1][2] Their major advantage is the fact that while ornery, they are actually easy to manage with as little as a pointy stick.[3]

The reason is simple. Brahmin are universally useful. Living ones can be used to pull carts, cars, plows, provide milk (that's terrifyingly different, yet similar to modern milk), provide efficient fertilizer and fuel for fires (crap,[4] in other words), hair for weaving, and so on and so forth. When slaughtered, they become even more useful as source of meat, leather (tough and durable, fit for everything including tents, clothes, armor, belts, saddle bags, shoes, you name it), bones (which can be fashioned into clubs, tools, dice, hoes, arrowheads), tails (perfect as brushes), and even fat for soap making. They also don't need much to survive, as they can go without water for extended periods of time and can subsist on whatever weeds they find in the arid wasteland,[1] digesting them in eight-compartment stomachs (double the number compared to pre-War cows).[5]

These advantages made them the cornerstone of many a post-nuclear economy, most notably the New California Republic, whose vast brahmin herds are the driving force of its industry and the influence of the powerful brahmin barons. By extension, they also fuel the economy of parasites, such as New Reno during the 2240s, when cattle rustling brought much needed income to the crime families of the city.[1]

This section is transcluded from Brahmin. To change it, please edit the transcluded page.

Brahmin are mutated cattle with two heads. In addition to twice as many heads, they also have eight stomach compartments,[6] males have four testicles,[7] and females have enlarged udders. They have lost much of their hair, leaving their skin a toasted brown, orange, or pink color, and attack by head-butting or trying to gore someone with their horns.

Brahmin meat is delicious - if only when compared to other sources of food. Brahmin are a source of milk that is like modern day milk, yet strangely different, it has been said to help heal radiation poisoning.

Wild brahmin can forage for themselves, and they can be found across the wastes, gathered into small herds, wandering here and there, munching on the dirty weeds scattered throughout the desert. Fortunately for the ecology of the wasteland (and the survival of their species), brahmin can go for long periods of time without water - they don't need much to survive. They have a strong sense of smell, and they don't hesitate to stomp over any wasteland predator that threatens them or their calves - well, except deathclaws, because no one messes with deathclaws.[1]

Occasionally, a brahmin is born with a single head - essentially, a regular cow. Ironically, these single-headed brahmin are referred to as "mutated" brahmin. Some doubt their existence.[8]

Brahmin has a minuscule amount of Hit Points, and as such pose, only a very minor threat, if any, even for low-level characters. When brahmin attack, they strike with their horns and batter into a foe. This is not highly damaging and is rarely seen, as brahmin generally flee when attacked. When a brahmin is killed, it will let out a loud bellow and flop to the ground.

Mad brahmin are brahmin that have been frenzied, whether it be from radiation poisoning or other traumatic experiences. They will always be hostile to the player character unless they have the Animal Friend perk.

Malnourished brahmin is a sickly brahmin that has been neglected and cannot find food on its own. Their meat is unaffected by their malnutrition. They can be found in various locations throughout the Mojave Wasteland, most notably Matthews Animal Husbandry Farm.

Water brahmin serves a similar purpose to caravans in Fallout: New Vegas, although the only goods they carry are sacks of water, essential for life in the Mojave Wasteland. These brahmin assist the Crimson Caravan in delivering water where it is needed. Fixed locations are near Miguel's Pawn Shop and the 188 trading post. Although they carry water packs, they won't yield any water when killed and looted.

These are brahmin that is owned by the Fiends and are located at Cook-Cook's fort. They are not part of the Fiend's faction cell and are friendly to the player character unless provoked. There are two unnamed fiend brahmin and one named "Queenie," whose death will frenzy Cook-Cook. 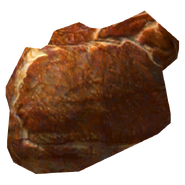 Jane's brahmin
Add an image to this gallery

Retrieved from "https://fallout.fandom.com/wiki/Brahmin_(Fallout:_New_Vegas)?oldid=3143135"
Community content is available under CC-BY-SA unless otherwise noted.