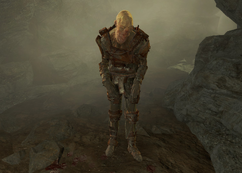 Bradley Ramone is a feral ghoul found in the Commonwealth in 2287.

Bradley Ramone was the Station 3 project manager for Dunwich Borers quarry operations prior to the Great War. He was in charge of the section dubbed "The Pit" by workers because of the long descent downwards, requiring catwalks to traverse the area. He was concerned about the safety of the railings installed as a number of workers had fallen to their deaths in this area, one of which was during a Happy Hour drinking event hosted by the company. He also complained of lack of equipment necessary to keep production in his area up, somewhat due to pressure from the Station 2 manager, John Hatfield. At some point he was lured into a trap in a chamber near Station 4 by Tim Shoots and the 'Management'. After this event, he guards the chamber above the enshrined Kremvh's Tooth as a feral ghoul.

In the game files, the other three ghouls found with Bradley are classified as normal ghouls, but Bradley is the "Boss" (editor ID "LvlFeralGhoulBoss") of the dungeon.

Bradley Ramone appears only in Fallout 4.

Retrieved from "https://fallout.fandom.com/wiki/Bradley_Ramone?oldid=3124478"
Community content is available under CC-BY-SA unless otherwise noted.