Bradley's shack is a location in the Mojave Wasteland in 2281. It is a small shanty style building south-southeast of Nipton and the Mojave Drive-in.

By the entrance, there may be some Jackal gang members. Directly across from the door, there is a hollowed-out rock with loot. A campfire can be found outside. Use caution to avoid the trip wire that triggers a rigged shotgun when entering the shack. In the back left corner, there is a bed and a few ammunition boxes behind the sandbags.

Front of the shack

Motorcycle outside of the shack 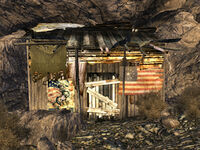 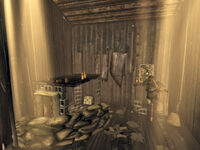