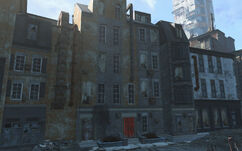 The Boylston Club is the remains of a ritzy social club in the neighborhood of Boston Common in 2287.

The Boylston Club was a private establishment that only allowed the upper crust of society[1] in; this included former presidents and vice presidents of the United States, governors and lieutenant governors, senators, justices, the legitimate male heirs of these people, and other esteemed gentlemen nominated by the group and able to afford an annual $500,000 fee.[2] Their social functions included: "Canadian cigars: Fad or Fashion?", a members-only tasting with Master Tobacconist Richard Glazier on October 5th; an "Evening with Lieutenant Governor Graham," a seven-course prix fixe dinner with spirits to follow on October 16th; "The Red Menace: Wines of Asia", a monthly tasting with Sommelier Lincoln Thomas on October 21st; and finally their Memoriam Gala on October 30th.[3]

The Memoriam Gala was a solemn occasion, a final toast to the world that was. The nuclear exchange of the Great War had occurred one week prior to the gala, and instead of trying to overcome the challenges of life afterward, they decided to commit mass suicide.

Fliers for the event were sent to their members and they added it to their event calendar on October 24th. The Gala included free food, an open bar – for members still able to make it – and their final toast at midnight October 31, 2077.[3] None that made it to the event left.[4][5]

The Boylston Club appears only in Fallout 4.

Boylston Club terminal with the holodisk A toast

Retrieved from "https://fallout.fandom.com/wiki/Boylston_Club?oldid=3496878"
Community content is available under CC-BY-SA unless otherwise noted.