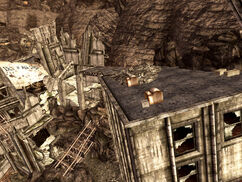 The Boxwood Hotel roof is a location in the Divide in 2281.

The area is directly outside of the Cave of the Abaddon and contains many destroyed and semi-sunken buildings. Immediately after leaving the buried buildings, there are two military shipping crates to the right, and farther ahead on the rooftop behind a vent, there is a metal box containing assorted items. Just before leaving on the first floor of the building, there are two vending machines, as well as a first aid box partly hidden underneath two mattresses. Occasionally, deathclaws may spawn just outside of the building. The unique deathclaw named Rawr is in a cave nearby.

A note can be found for the Nostalgia challenge, on Jackie's terminal north of the wastewater treatment plant. It is located west of the hotel roof, up the second set of scaffolding, inside the toppled building along the southern path.

The few marked men located here will respawn; one may be carrying a Stealth Boy and Blade of the West.

Mission report
Add a photo to this gallery
Retrieved from "https://fallout.fandom.com/wiki/Boxwood_Hotel_roof?oldid=3412188"
Community content is available under CC-BY-SA unless otherwise noted.