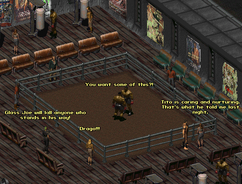 “Was almost an unknown, fresh out of the wastes, before he\she came to box in New Reno. He,s\She's so mysterious!”

Boxing fans are spectators at (training) boxing matches at the Jungle Gym in New Reno.

They cheer on the boxers during their training and boxing matches to create atmosphere. Females seem to know some boxers personally.

If the Chosen One is a Prizefighter, the spectators ask to punch them to be able to tell their children.

Boxing fans appear only in Fallout 2.

Retrieved from "https://fallout.fandom.com/wiki/Boxing_fan?oldid=3339963"
Community content is available under CC-BY-SA unless otherwise noted.